I've been joining in the challenges at

britcomicontest and wheee I won mod's choice for the Blackadder Queenie one! It's my first ever award for an icon. :massive grin: I know I'm not the best icon maker, still got plenty of practice before I master GIMP but yay, obviously doing something right with cropping at the very least.

Also, check out my few 4400 graphical efforts recently. There's some Jacqui McKenzie headers/banners in this folder that were intended for the Jacqui community but didn't get used. And... ( Collapse )

I also got my banner for my McKay/Weir 2007 Isis Award. :) I could never decide if that fic should have had more chapters. I had two more planned but hey people like it as is. 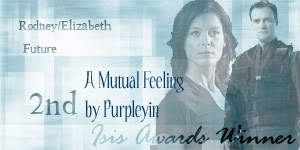 Also, spread the word (and/or join in, if you feel inclined) - McKay/Weir Love Fest

Spoilers: For S4 up to "The Truth And Nothing But The Truth"